“You plant them, you pick them, take them out of the shell, and cook them. So fresh, so many kinds: lima beans, pinto beans, red beans, kidney beans, big white beans. When you cook them for five or ten minutes they are delicious. Don’t cook too much or they get mushy. Then you cook the rice and beans like Spanish people do. Have them with some ham or chicken. Delicious!”

Every few weeks, the Folklife Center newsletter features an interview with a notable South Jersey personality chosen by one of our community scholars participating in the H.E.A.R (Heritage Evident And Relevant) project.

This week H.E.A.R. community scholar and Newton Monthly Meeting’s board member and clerk, Cynthia Kammer, interviewed Camden gardener, Hipolito “Polito” Malave. Each day, 68-year-old leaves his residence at North Gate apartments to walk across a tangle of highways, arriving at the Newton Friends Meeting House before the break of dawn. There he plants vegetables in gently undulating rows that remind him of the backyard gardens where he spent his childhood in Puerto Rico. Weeding, watering, and scattering piles of hay, Polito contributes to the community throughout the year by producing vegetables for Newton Friends’ donation garden. Polito’s daily labors, sometimes with but usually without the occasional green-thumbed volunteer from the Friends congregation, is all that keeps the forces of nature from swallowing up the meeting house, an historic landmark in the heart of Camden.

From Cynthia Kammer’s interview we learn that this partnership came about under less than ideal circumstances. Previously, Polito had been cultivating the grounds of North Gate. He’d bring his neighbors tomatoes and banana peppers,“things Puerto Rican people like to cook.”  Then one day the bulldozers came to raze it all. “I barely had time to grab my tools,” recalls Polito. “[The City of Camden] didn’t want to tell us they sold the property, because they were afraid of some old Spanish guys protesting.” Although the new dollar store erased Polito’s previous gardening triumphs, his tomatoes and peppers keep popping at the Newton Meeting House Garden.

To learn more about the H.E.A.R. project got to: www.perkinsarts.org 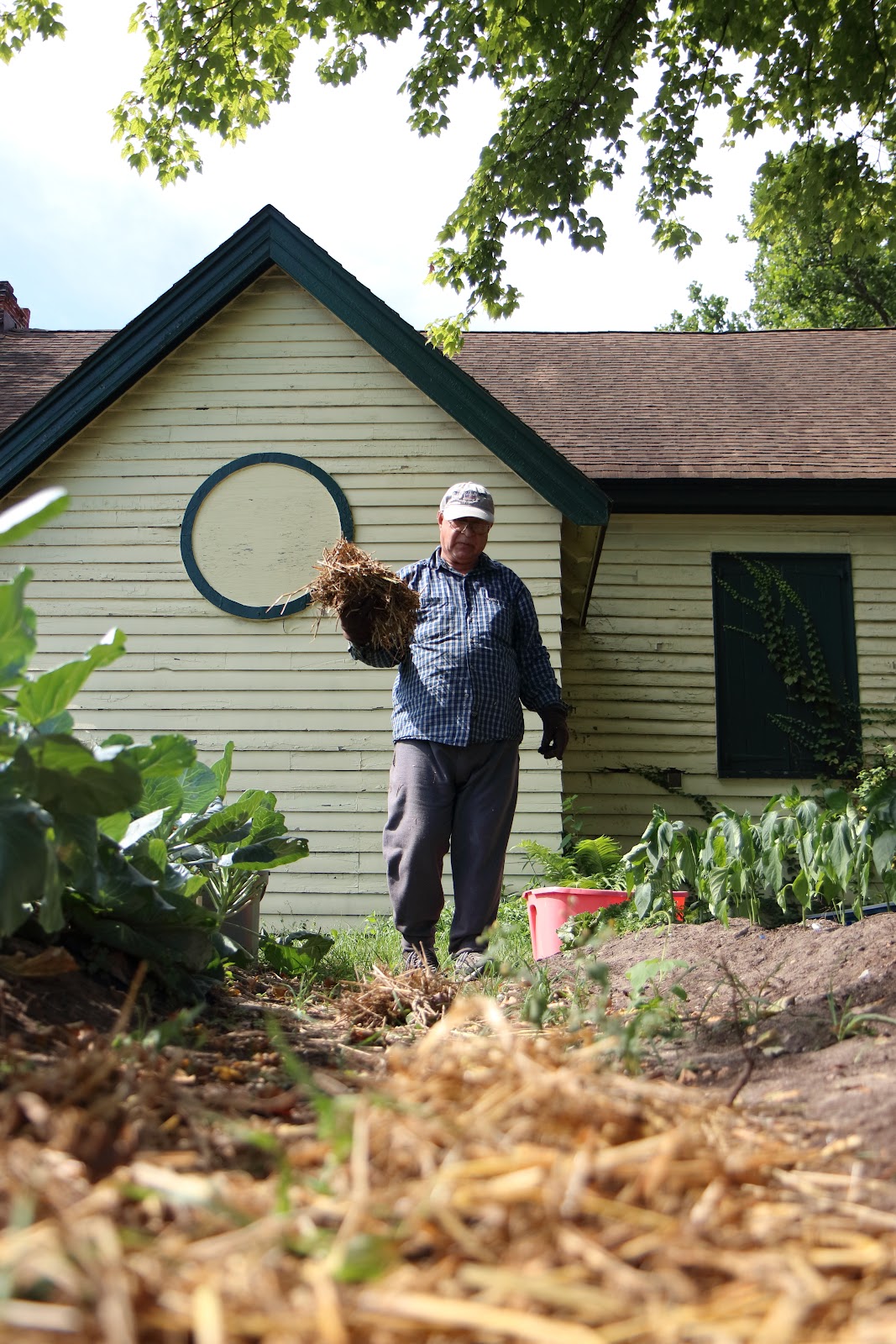 P: I was born in Puerto Rico in 1955. I was raised out in the country. My ancestors were farmers and my father was a farmer too. I watched him. That’s why I know something about growing plants.

My mother had 14 kids. Two died and 12 were left: seven sisters and five brothers. My father worked on the roads. My mother would get up early to fix his lunch so he could walk to his job by 7:00am. After that she don’t go back to bed. She gets us up so she can fix breakfast for the kids before school.  Then  she goes out to the barn and milks the cow–her name was Bessie–and puts her out to pasture. Then she came back to the house and worked very hard all day.

The older children had to travel a dirt road to the main road and catch a bus. The old bus would come and pick them. And then again at night they would travel back. They would come home and take their uniforms off and put on their regular clothes to do their chores – like cook, go down to the pond to get water to cook. My mom had a homemade stove where she would cook with wood. She would have six rocks and she would put them on a table and build a fire in the rocks.

CK: That was a lot of mouths to feed.

We used to have a few female pigs, every year they would get pregnant and have little piggies. We would sell some and save two for Christmas and celebrate and roast them over a pit. We would have a big party because we were a big family.

CK: Is that still the way it is today? Does the government help to support the people agriculturally?

P: No, The government changed over time. Right now people don’t have that opportunity to have their own farms. That was back then. People were treated with respect.

CK: Do you still have relatives there?

P: Yes, I’ve got sisters. My father had a big family and now they passed away and their children I don’t even know. The cousins I don’t know.  I never met them. They are still there.  Some are in the States–Philadelphia, New York. I came here at 13 years old.

CK: What brought you to Camden?

P:  Oh, my mother and my father got divorced when I was little, my father’s problem you know. My mom met this other guy, this really nice guy and my stepfather (she didn’t marry him, just lived with him). He was a farmer too and came here to work with other Spanish people on the farms. He said to my mom, “Carmen, I will work and send for you when I get a little money” and that is what he did. At that time Camden used to be different–a lot of stores open, movie houses, gas stations, very different.

In 1967 they had a riot over here (Camden) and my mother moved back to Puerto Rico. I said, “Ma, I don’t want to go back. I want to stay here, learn English, go to school.” My brother had moved to Elmira, New York where he worked in a bakery. I moved in with him and went to high school there until 1984.

CK: So when you came to Camden to live in the apartments did you have a garden?

P: Yes, I lived with my sister temporarily and then I got my own place and had a little space to plant some beans.

CK: What was special about beans?

P: Well beans, when you grow them, the vines grow up and when you open the pods, the beans are inside. There is a process. You plant them, you pick them, take them out of the shell, and cook them. So fresh. So many kinds: lima beans, pinto beans, red beans, kidney beans, big white beans. When you cook them for five or ten minutes they are delicious. Don’t cook too much or they get mushy. Then you cook the rice and beans like Spanish people do. Then you have them with some ham or chicken. Delicious! When I was in New York, my wife and my daughters cooked American.  I missed the Spanish food.

CK: Are you growing any beans in the donation garden at Newton?

CK: How did you end up gardening at the Newton Quaker Meeting House donation garden?

P: I used to have a garden at my apartment at North Gate. We had land that the City owned and people would go down and plant their gardens every year. I grew a lot of things there that we grow here, but the soil is so much better here.  So healthy. Then the City sold the land to Family Dollar and they took away our gardens.

I used to walk by the Newton garden every day. Dan who tends the garden would talk to people when they went by.  I said, “I have a garden over there by the apartments.” He said “well why don’t we go down by the [Delaware] River where they give away plants for community gardens and get some?”

Then they brought in their machines and took our tools. I came down to talk to the manager and said, “what’s going on here? How come you didn’t tell us the machines were coming today? Well he said, “I didn’t know.” He didn’t want to say. But I got the tools back.

I said to Dan, “we don’t have our garden anymore.” He said, “I have an idea, come over here and garden with me. I got tools over here.” I also had tools that I brought over.

CK: What is your favorite tool?

P: Oh, the hoe.  You can do everything with that. I have everything here that I had over there–tomatoes, peppers, beans

I get up in the morning about 5:30am because it is light and I put my clothes on and come down to the garden. I am there every day from 5:30 in the morning until about 1:00pm.  When I had my other garden I would do the same and the others would go up early, but I would stay in the garden, sit under a tree in the shade and get some ice water to drink. Then I would go upstairs and take a shower and that would be my day.  I enjoyed that. People would be shouting out their windows saying “I see you down there!” My garden used to be the best garden there. I took care of it.

CK: Did it remind you of Puerto Rico?

P: Yes.  My father would work to make the best garden. He didn’t have anyone to help him.  When planting season would come and I was older, I would help him. We would grow food and sell some.

CK: What do you do with the produce you grow here at Newton?

P: Well I take them to the North Gate Apartments. I distribute them over there to people.  I don’t take it all. People come by and get some and Dan gives away some. I give to the people who like Spanish food–tomatoes, peppers, beans.

P: Sweet peppers, so they can make sofrito. They like sofrito. You make it with cilantro, onions, garlic, and peppers.

CK: Why is sofrito important to Spanish people?

P: Because when you cook rice and beans, it flavors everything

CK: How do the foods of Puerto Rico play a part in your holidays and celebrations?

P: Well for holidays we have ham or turkey. Of course your beans and rice, pernil–fresh ham with special sauce, oregano and other herbs.

P: I would like to live back in Puerto Rico. If I had money I would like to buy a little land, live in the country. Buy some land, build a little house, a concrete house, in the country, not in the city. The farther away you are the better it is. Out where you hear the birds, where you have a nice garden. I would like to live there with somebody–a brother or a sister–-have a nice garden and a nice house, build a porch all around real high over the mountains so I can look out and see the valley. I’d like to build it near a river, a little creek so I can hear the water, walk there and take my shoes off and soak my feet. That is my dream before I die.

CK: That is a wonderful dream!  It could happen. You still have family down there.

P: Yes, and my house will have speakers all around the porch so I can hear music. I like jazz music. It is good to dream. I lived in a house like that when I was little. I would climb a tree and look out–a cava tree in the spring when the flowers were in bloom and it smelled so sweet. It is a dream. Well that’s about it.

CK Thank you so much for sharing your life with me. I loved it!